Birds in the water 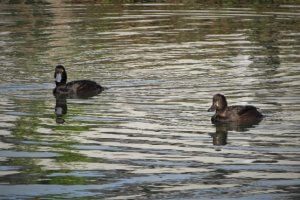 One species of duck that is common along this stretch of river is the cute little New Zealand scaup or pāpango as it is known in Māori because of its dark colour. They are smaller than other common ducks, are coloured dark brown and black, and dive under the water for food.  They may submerge for twenty to thirty seconds and travel to depths of three meters looking for aquatic plants, small fish, water snails, and insects.

Often there are small groups of pāpango.   You can pick the males because they have darker plumage and have a distinctive bright yellow eyes.  They are quite sensitive to humans and animals like dogs and will keep a safe distance, unlike other ducks who are often looking to be fed.

Pāpango are found throughout New Zealand.  They nest from October to March. The newly hatched ducklings begin diving for food on their first outing.

Shags are another common visitor to this part of the river as they search for food.  All shags dive and swim underwater to catch fish, crustaceans, and insects. Usually, they are seen as isolated individuals, but occasionally they will be seen working as a group.  Often they will stay underwater for 20 seconds or more and swim some distance from where they disappeared.  They surface for a few seconds then dive again so you have to watch hard to see them.  You may see one surface after their underwater swim with a small fish or young eel in its mouth.  Sometimes these catches are quite large and the shag has some trouble swallowing the catch! 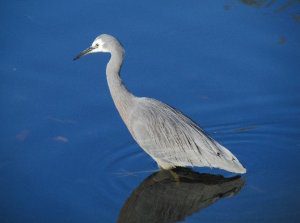 Often seen alone on their long slender legs close to the shore as you look downstream along what is known as “the cut” will be a white-faced heron or matuku moana.  These large grey birds with white faces wade slowly close to the edge of the water looking for small fish and other food like crabs.  They will often stand completely still as they look for prey and when they move, notice how little they disturb the water.  Once food is seen, they strike with lightning speed to grab their prey.

They appear very graceful birds but their call is a rough guttural squawk. They are actually a fairly recent arrival in New Zealand having become established naturally in the mid 20th century.  They are now widespread.

Head west across Radley Park passing the dog exercise area, to the Roimata Food Commons base 350m away.