The Woolston Cut – on the control gate bridge 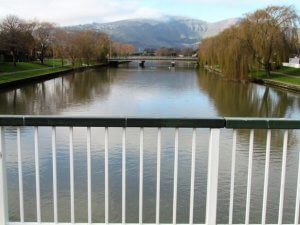 Look down the Woolston Cut from the Barrage

The Opāwāho/Heathcote River takes a sharp right-hand turn as it flows downstream at this point to flow around what is known as the Woolston Loop.  In the 1980’s it was decided to build a bypass to this long loop of the river to increase the amount of water that could be evacuated in times of flooding.

The concrete sided channel that you can see as you look towards the hills downstream (510m in length) was dug to allow water to flow directly out to the estuary instead of travelling around the long loop which takes you past the Tannery.  The cost for the project was two million dollars. 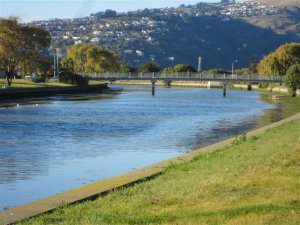 The Woolston Cut – note the concrete walls on the sides

However, once built there were environmental issues.  Allowing water to flow more easily to the sea also allowed seawater to travel further upstream causing bank destabilisation and the death of trees.  The saltwater changed the soil cohesion, which was compounded by the activities of a burrowing crab that had migrated further upstream.  Tree death was also occurring from the increased saline conditions.

The solution adopted was to install large control gates that can be shut most of the time but opened in times of flooding.   Normally the river will flow around the loop, but in times of potential flooding, the gates can be opened to release excess water quickly through the Cut. 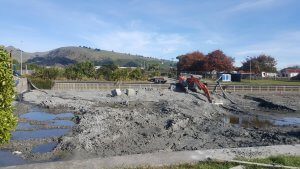 Lessons learned
The Woolston Cut experience brought engineers and ecologists together.   We learned that rivers are complex networks of life.  Tampering with the natural flow of the river had all sorts of consequences.   Flooding issues for Christchurch remain.  Uplift from the 2011 earthquake at the mouth of the Opawaho/Heathcote River has potentially reduced flow into the sea, as does sea-level change.   Climate change has also increased the risk of heavy rainfall.
More emphasis has now been put on the storage of water upstream in times of flooding to reduce peak flows, and greater care is being taken to manage the river considering the ecology, landscape, recreation, heritage and cultural values.

Your next marker is 120m away. From the barrage gate, cross the bridge over the Opāwāho/Heathcote as it goes around the loop and turn right to the water’s edge.