The marker indicating the original position of Union Wharf

Union Wharf was also known as Millton’s Wharf and was built principally for the coal and timber trade.  Part of this wharf may have been used by the Thackers of Okains Bay to land their timber. 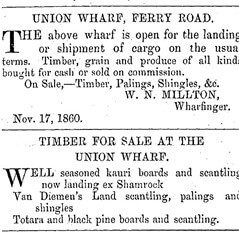 Captain Buxton had won the government reward of five hundred pounds for taking his boat successfully across the Greymouth Bar on the West Coast to bring supplies from Lyttelton to the gold diggers there.

Captain Marquet made regular calls at this wharf with his 20-ton ketch Margaret with timber from the peninsula to serve the booming building industry in the city.  A friend with a strong draft horse helped tow his ketch around Humbug Reach (also known as the Devils Elbow) at the entrance of the river into the estuary.  This stretch was always difficult with the prevailing winds and tides.  As soon as the vessel was tied up at the wharf the friends would walk over to the hotel for refreshments, not forgetting the horse, which was rewarded with a bucket of beer.

The next marker is on the barrage gate 90m away.