Looking in the Water 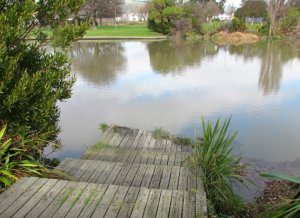 Go down onto the jetty

The Mysterious Story of Tuna

If you had some spare cat food and dropped some off this landing into the water, you will probably see a mysterious eel, or tuna as known by Māori, emerge to gobble it up. If it were at night time there would probably be a collection of bodies as they prefer darkness. In the stretch of river you can see, there may be over a hundred eels or tuna. Most will be short-finned but there may be some endangered long-finned tuna. They both have an amazing life journey. 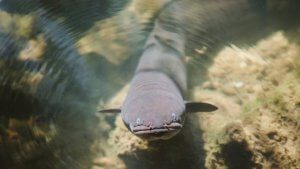 Born over 2000km away …
Short-finned eels, like their long-finned cousins, start and end their lives in the sea. Their birthplace is over 2000km away somewhere in the deep ocean between Fiji and Tonga. Adult females lay between one and three million eggs which, if fertilized, will develop into very small leaf-like creatures. Carried by currents, some fifteen months later they change into tiny transparent glass eels which look a little like whitebait or inanga. Swimming off our coastline these eels sense sources of fresh water. Finding rivers to swim up, they develop a dark colour and grow a gut for the first time. At this stage, they are called elvers. 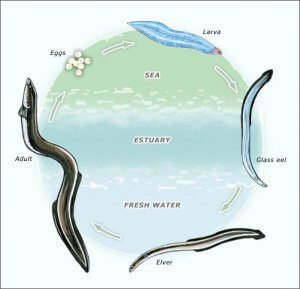 The life cycle of tuna

A place to call home …
The elvers migrate up rivers travelling mostly at night during springtime. They find a place to settle, like this area of the Opāwāho/Heathcote River where they may grow up to a metre long and can weigh up to 3.5 kilograms. They are great scavengers for food. Their skin is thick and leathery but actually has scales embedded in it. If you catch an eel you will quickly discover there are slime glands dotted all over it making it very slippery!

Time to breed and die…
When male short-finned eels are about fourteen years old, and females about twenty-two years, they get the urge to breed. They eat their last meal and their guts begin to shrink away. Their fins grow larger, their eyes almost double in size, and they head off downstream usually between February and April, on the darker nights. Sometimes the migrating eels gather in solid squirming masses near the mouths of rivers. In former times, these were important places for Māori to harvest eels for food supplies.  Swimming over 2000 kilometres northwards to their spawning ground, the females release their millions of eggs which are fertilized by the males, and then the parents die.

Traditional kai
For local Māori, short-finned tuna was a significant food resource and this area was a traditional food gathering site. Māori had extensive knowledge of the ecology of eels and harvested them through a variety of techniques.  Today short-finned tuna are reasonably plentiful as they survive well in polluted waters, but long-finned tuna need better quality water and numbers are in serious decline.

Inanga/whitebait – this is a very important area for spawning

Eggs are laid on land
A few days before a full and new moon from February to May, inanga migrate from upstream to this special area of the Heathcote/Opāwāho River. Inanga only lay their eggs in this part of the river where fresh water and sea water mingle. Eggs are laid on a spring tide which is a special big tide.

Shoals of inanga work their way along the bank, pushing into the vegetation at the high tide level. Each female can release up to 13,000 eggs, which are about 1.2 mm in diameter. The males can turn the water milky as they fertilize the eggs.

After the tide goes down, the eggs are hidden at the base of the grasses which are now out of the water till the next big spring tide. The grasses protect them from dehydration, extremes of temperature and damaging UV radiation. When the water of the next spring tide reaches the eggs they are stimulated to hatch and are carried downstream to the sea where the tiny larvae grow quickly, feeding on plankton in coastal waters for 6 months. 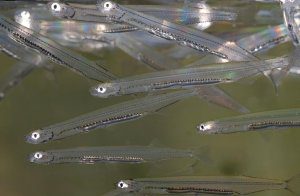 Whitebait return
By spring the juvenile fish have grown to about 55 mm in length and start to migrate back into rivers and streams. During this migration, they are called whitebait. Those that escape the whitebaiters’ nets spend the summer upstream growing into adult fish (inanga). They grow to 8–11 cm in length and by late summer most inanga are mature and ready to spawn. Many fish die after spawning but some live on for another year.

As you look into the river you will observe it is not crystal clear. Shortly you will walk over the barrage bridge and observe some of the rubbish in the river that accumulates here. It wasn’t always like this.  In recent years the water quality has improved a little but we have a long way to go.

Industries can no longer discharge all their waste directly into the river but people still throw rubbish and garden waste into the river, and in our city we allow water to wash off our streets into gutters and into the river.

The brake pads we use on our cars release metals like copper into the river. Duck poo and dog poo often ends up in the river. We empty all sorts of chemicals into our stormwater drains and these chemicals find their way into the river.

Poor planting and development practices mean we allow all sorts of sediment to wash into the water, and measurements of nitrate levels are very high. If you look amongst the grasses by the river where the inanga spawn you will find all sorts of plastic and other rubbish.

The Opāwāho/Heathcote is one of the most polluted waterways in our country! When Europeans first came here they played in the water and drank it. Until recently there were annual raft races in the river. Now it is not safe to play in this water, and certainly not drink it.

Wouldn’t it be wonderful if we could push reset and treat the river as a source of life rather than a convenient drain.  The tuna and inanga, and our mokopuna (grandchildren) would say a big THANKYOU!

Your next marker is just a couple of meters away.