Aikman’s Wharf – servicing a woolscour and the importance of Raupō 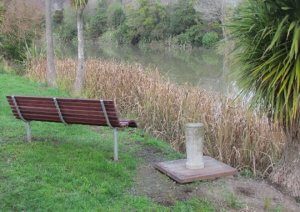 This marker memorialises the position of Aikman’s Wharf.

Originally Navigation Street connected this wharf with the Ferry Road which was a main artery into the new town of Christchurch.  This wharf was built chiefly to service a nearby woolscour.  The wharf run by Sandy and Colin Aikman, auctioneers and general agents, and served as a collection point for wool bales brought in from Saltwater Creek, Kaiapoi, Gore Bay, and Banks Peninsula to the wool scouring works located on the motel site of today.

Later a bonded warehouse was also built adjacent to the wharf, the first to be built in the area outside of Lyttelton.  This enabled goods that attracted an import duty to be stored until the duty was paid and the goods released.  It was also capable of storing 350 tons of grain. 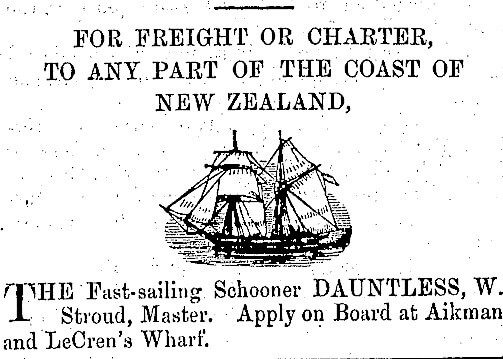 In December 1860 W Stroud the Master of the schooner Dauntless was advertising he would take freight or consider a charter to anywhere in New Zealand, sailing from Aikman’s Wharf. 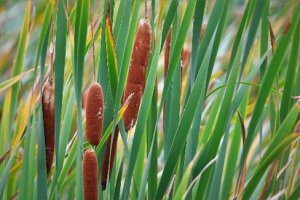 Nowadays, you can see a stand of raupō reeds growing at the water’s edge.

Bundles of stalks were used to make small canoes (mōkihi) and rafts to facilitate water travel and the starchy rhizome root was a food source along with the profusive yellow pollen which was baked into a sweet cake. 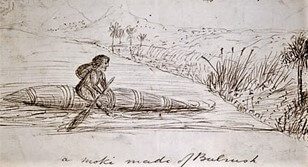 This sketch by missionary Richard Taylor shows a Māori crossing a river on a raupō mōkihi, probably in the 1840s

Downstream 150m you will find another wharf marker.