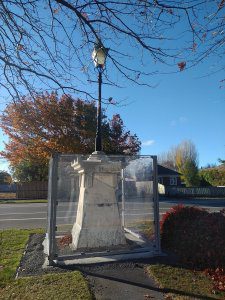 You are looking at the Woolston Borough Monument, which is a memorial gas lamp gifted by the first mayor of Woolston, John Richardson, in 1893 to commemorate the proclamation of Woolston as a borough that year. 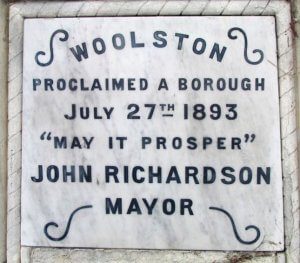 The plaque on the Woolston Monument

The area over the other side of the river was originally called Roimata meaning teardrop in Māori. With European settlement the whole area was known as Lower Heathcote.

In 1870 the name Woolston was gazetted as the name of the local Post Office in Ferry Road. Woolston became a district in 1882, and remained a self-governing borough until 1921, when it was amalgamated with Christchurch.

With the river serving transport needs, a water supply, and as a convenient way of disposing of waste product, Woolston developed both as a residential and industrial centre.

Abbattoirs, woolscours, candlemakers, soap makers, lime kilns, and glue makers were soon sited along the river. The quality of the river quickly deteriorated and Woolston became known as an unhealthy place to live. 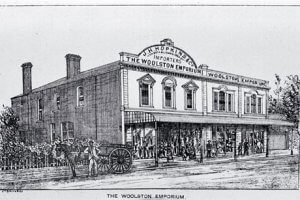 Joseph Hopkins established the Woolston Emporium in 1863. With a building footprint of 5,600 square feet (520 m2), it was a rather large store for its time. The Woolston Emporium had six departments: drapery, clothing, boots, grocery, crockery, ironmongery, and a corn store.

The next marker is on the Ferry Road end of the Radley Bridge about 120m downstream.