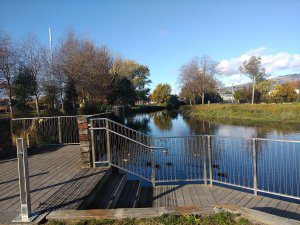 Welcome to the Opāwāho/Heathcote River. Māori had two names for different sections of the river. O Hika Paruparu (the muddy fishing place) for the river in the estuary region, and the O Pā Wāho (the outward or seaward Pa) for this section flowing through Opawa where a small settlement was located. Early Europeans named the river the Opawa, the Serpentine, and finally the Heathcote. Sir William Heathcote was a member of the Canterbury Association.

The early European in the new settlement of Christchurch faced a problem. How could they get goods landed in the port of Lyttelton to the new settlement of Christchurch? Timber and other building products from Banks Peninsula also needed to be supplied to the growing town. Because there were no roads and tunnels the solution was to bring goods by smaller boats around to Sumner, across the bar, and up either the Heathcote or Avon Rivers. Because of its depth, the Heathcote became the preferred choice.

Christchurch Quay was the first wharf to be built along the Heathcote River, sited as far upstream the small boats could navigate. Built in 1851 it was soon joined by other wharves constructed just downstream. Personal belongings for new settlers, huge amounts of timber to build the new town, and other imported goods were brought up the river to be unloaded. At its peak fifteen vessels docked in a day to unload and load cargo here.

JW Smith of Sydenham reminisced: “Once you would see quite a dozen traders in various parts of the river or alongside the wharf. Luggage and goods were taken to Christchurch Quay. … There was a great scene of activity in those days what with carts and drays taking goods to the city. This was the spot where that notable Ferry Road drain of such evil repute emptied into the river. It was very pernicious in summertime and was the cause of disaster and disease to many.” (The Star, 11th Feb 1919)

The river provided a vital link in transport but also found another use as a convenient sewer and dump. The transport link was short-lived. Boats were affected by weather and tides, and others were lost on the notorious Sumner Bar. The river also begun silting up and reducing in depth. In 1867 a railway tunnel was put through to Lyttelton and the river trade quickly diminished, and by 1869 the only wharf with constant trade was the Heathcote or Steam Wharf located downstream. The use as a sewer and dump, unfortunately, continued for much longer.

The next marker is about 40m downstream at the Woolston Monument.